Neurons are the conducting cells of the nervous system. A typical neuron consists of a cell body, containing the nucleus and the surrounding cytoplasm; several short radiating processes (called dendrites); and one long process (called the axon), which terminates in twiglike branches and may have branches projecting along its course. 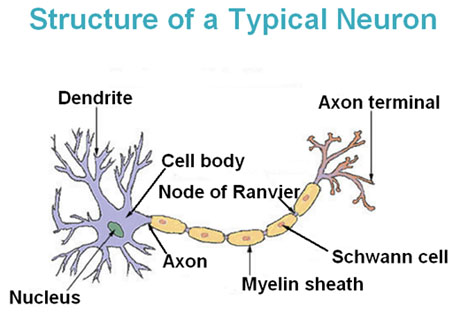 In many ways, the cell body is similar to other types of cells. It has a nucleus with at least one nucleolus and contains many of the typical cytoplasmic organelles. It lacks centrioles, however. Because centrioles function in cell division, the fact that neurons lack these organelles is consistent with the amitotic nature of the cell.

An axon is a long, hair-like extension of a nerve cell that carries a message to another nerve cell.

Glial (Neuroglial) cells do not conduct nerve impulses, but, instead, support, nourish, and protect the neurons. Glial cells are far more numerous than neurons and, unlike neurons, are capable of mitosis.

For more information about anatomy of brain and CNS, go to the Nervous System section of the Anatomy & Physiology module on this Website.