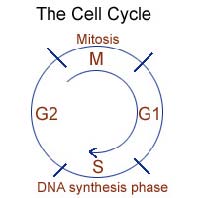 Cell division is the process by which cells reproduce (mitosis). The cell cycle is a series of changes the cell goes through from the time it is first formed until it divides into two daughter cells. It starts at mitosis (M-phase) and ends with mitosis. In between are the G-1, S, and G-2 phases. The duration of S, M and G-2 are relatively constant in different tissues.

Between the M-phase and the S-phase is a gap (G-l) where production of RNA, proteins, and enzymes needed for DNA synthesis occurs. The duration of G-1 varies and determines the length of the cell cycle.

The S-phase is when DNA synthesis occurs.

Between the S-phase and M-phase is a second gap (G-2). Cells are thought to prepare for mitosis in G-2 when specialized proteins and RNA are produced. G-0 is a dormant phase.

The four phases of mitosis are: