The word cancer comes from the Latin (originally Greek) derived term for crab, because of the way a cancer adheres to any part that it seizes upon in an obstinate manner like the crab. Hippocrates first described cancer as having a central body with the tendency to reach out and spread like "the arms of a crab." Besides the popular, generic term "cancer" used by most people, there is another more technical term: neoplasia. Neoplasia (neo = new, plasia = tissue or cells) or neoplasm literally means new tissue in Greek. This indicates that cancers are actually new growths of cells in the body.

Another term for cancer is "malignant tumor." Tumor literally means "swelling" or "mass." In this case, it refers to a mass of non-structured new cells, which have no known purpose in the physiological function of the body.

There are two general types of tumors: benign (non-cancerous) tumors and malignant (cancerous) tumors. A benign tumor is composed of cells that will not invade other unrelated tissues or organs of the body, although it may continue to grow in size abnormally. A malignant tumor is composed of cells that invade the basement membrane and invade or spread to other parts of the body. This occurs either by direct extension to neighboring organs and/or tissues or by metastasizing to distant sites by means of the vascular system (the blood stream), the lymphatic system, or by seeding or implantation of cancer cells in body cavities.

Terms such as "mass" and "lump" are used to describe any overgrowth of tissue. However, these terms may not necessarily mean that such growths contain cancer cells.

In addition to neoplasia, there are several other terms referring to abnormal cell growth. These include the following:

Hyperplasia refers to an abnormal increase in the number of cells, which are in a normal component of that tissue and are arranged in a normal fashion with subsequent enlargement of the affected part. One example is thyroid hyperplasia, an enlargement of the thyroid gland caused by an abnormal rapid growth of the epithelial cells lining the follicles. Another example is: Guitar strumming leads to hyperplasia of the cells on the thumb (a callus is formed). The callus on the thumb is a hyperplastic growth.

Hypertrophy refers to an abnormal increase in the size of each cell, for example, the increase in cell size of cardiac muscle.

Metaplasia refers to the replacement of one mature cell type with another mature cell type: for example, squamous metaplasia of the respiratory columnar epithelium — as evidenced by the metaplastic cough of a smoker. 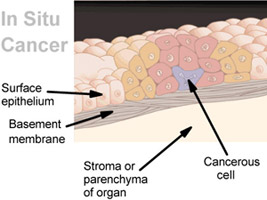 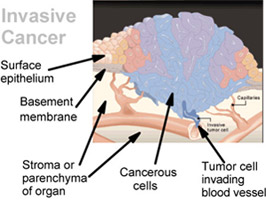 « Previous (What is Cancer?)Next (Cell Biology of Cancer) »