What people with cancer should know: https://www.cancer.gov/coronavirus

Get the latest public health information from CDC: https://www.coronavirus.gov

Get the latest research information from NIH: https://www.nih.gov/coronavirus

Pathologists have many ways of describing in situ cancer

Organs and tissues that have no epithelial layer cannot be staged as in situ, since they do not have a basement membrane (e.g., sarcomas). The SS2018 manual lists the Chapters that cannot have in situ (see page 10). 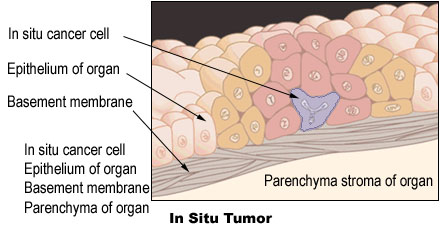 Source: Adapted from an illustration by Brian Shellito of Scientific American, as printed in Cancer in Michigan, The Detroit News, Nov. 1-2, 1998.