In situ carcinomas may arise in either flat mucosa or in a polyp. If a tumor arises in a polyp, it is important to determine whether the stalk is invaded. If it is, the tumor is assigned to T1.

Most colorectal cancers appear to arise in polyps. The risk of cancer increases with the size of the polyp; 30-50% of polyps over 2 cm in size are malignant.

The figure below is a pedunculated adenoma or polyp. The figure on the right is a sessile, or flat, adenomatous polyp. The dark areas A, B, and C represent zones of carcinoma. Area A shows no invasion and is therefore in situ. Note that any invasion below the muscularis mucosae (Areas B and C) in a sessile lesion represents invasion into the submucosa of the bowel wall. In contrast, invasive carcinoma in a pedunculated adenoma (left) must traverse a considerable distance before it reaches the submucosa of the underlying bowel wall. Although more pedunculated adenomas have a tubular pattern and most sessile adenomas are villous, exceptions to this generalization occur. 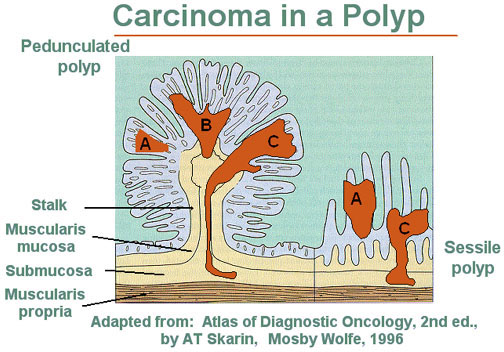 Independent, simultaneous colon primaries in more than one segment of the colon should be abstracted separately. The surgical codes for all primaries should reflect the complete extent of the resection.

The number of lymph nodes involved has prognostic importance: patients with 1-3 nodes positive have a better survival than those with 4 or more nodes positive.

The ileocecal valve is considered part of the large bowel (cecum), not the small intestine (ileum).

"Bowel wall" means different things to different medical professionals. To some, it is the muscular layers of the intestine only; to others, it is the entire thickness of the intestine, from inside to outside. Thus the term "through the bowel wall" could be different stages. If "bowel wall" is the muscular layers only, extension through the bowel wall would be into the subserosal fat but still within the thickness of the intestine (localized). If "bowel wall" is the entire intestinal thickness, invasion through it would extend tumor outside the organ and therefore it would be at least regionalized by direct extension. It is important to define "bowel wall" at your facility, so that you can correctly stage the tumor based on the pathologic description.

The serosa of the colon (outside layer) is one cell layer thick; therefore, involvement of the serosa indicates that the tumor has broken through the serosa and may spread by extension from there.

The serosa is also called the visceral layer of the peritoneum, so serosal invasion is considered regional stage unless there is definite evidence of distant spread.

Do not add together the sizes of pieces of tumor removed at biopsy and at resection unless it is done/stated by the pathologist or surgeon. Use the largest size of tumor, even if this is from the biopsy specimen. If no size is stated, record as 999 in the field "Size of Tumor."

Liver involvement may be a direct extension from a tumor in the hepatic flexure and would be regional disease; otherwise it is considered hematogenous (blood-borne) distant metastasis. If the liver metastases can be resected, the patient has a better survival.

One of the determining factors for preservation of the anus is how close the tumor is to the sphincter. If sufficient distal rectum permits low anterior resection or colo-anal anastomosis, this treatment is preferred to a permanent colostomy.

AJCC staging applies to carcinomas only; lymphomas, carcinoids and sarcomas are not to be included in this staging system.

Use TX if the primary tumor was excised at another facility and no information about tumor size is available.

There have been several modifications of the Dukes' staging for colon and rectal cancers. It is important to find out which modification is being referred to and to use that system consistently when analyzing data.

The parts of a two-stage procedure are:

In such a case, the closure of the colostomy is not coded as part of cancer directed treatment.