Anatomy of the Stomach

The stomach lies just below the diaphragm in the upper part of the abdominal cavity primarily to the left of the midline under a portion of the liver. The main divisions of the stomach are the following:

The fundus is the enlarged portion to the left and above the cardiac orifice.

The body, or corpus, is the central part of the stomach.

The pyloric antrum is the lower or distal portion above the duodenum. The opening between the stomach and the small intestine is the pylorus, and the very powerful sphincter, which regulates the passage of chyme into the duodenum, is called the pyloric sphincter.

The stomach is suspended from the abdominal wall by the lesser omentum. The greater omentum attaches the stomach to the transverse colon, spleen and diaphragm.

The common mesentery suspends the small intestine. The parietal peritoneum lies over the duodenum and other structures, such as the abdominal aorta. Because they lie behind the peritoneum, they are called retroperitoneal structures.

The figure below shows the anatomy of the stomach. 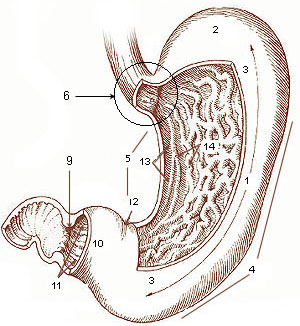