All users of this module are encouraged to download and read the very useful material contained in the "Abstracting and Coding Guide for the Hematopoietic Diseases".

This 7 word phrase is the World Health Organization's formal name for a single disease entity that has different presentations. The diseased cells look the same under the microscope; only the background tissue is different-in blood or bone marrow it has traditionally been called chronic lymphocytic leukemia (9823/3), in lymph nodes the name has traditionally been small lymphocytic lymphoma (9670/3). The two names had to be split to be compatible with ICD-10. This diagnosis is listed at 9823/3 and cross-referenced to 9670/3 in ICD-O-3.

To chose the correct code:

Sixth digit codes for T-cell, B-cell, and NK-cell phenotyping of lymphomas and leukemias should be based on the diagnosis as specifically stated in the pathology report. Sixth digit phenotype codes should not be used when T- or B- cell is implied from the boldface header in the morphology numeric list. In other words, if no T- or B-cell designation is provided in the pathology or laboratory report, do NOT code the T- or B- cell designation based on the boldface header in ICD-O-3. When cases are analyzed, they can be grouped by cell line as stated in the category headings in the lymphoma and leukemia sections of the morphology numeric list.

"Coding to the higher morphology code"

The general ICD-O-3 guideline to use the numerically higher morphology code if the diagnosis of a single tumor includes two modifying adjectives with different code numbers (Rule K) does not apply to the hematopoietic diseases (M-9590-9989) in general. For the hematopoietic diseases, code to the more specific morphology, if that can be determined, which may not be the numerically higher code number. For example, if the facility pathology report states "acute myelogenous leukemia" (M-9861/3) and a consultant reports the same tissue to be "acute myeloid leukemia, AML1(CBF-alpha/ETO)" (M-9896/3), code the case to M-9896/3 because it is more specific, not because it is a numerically higher code. The primary term for M-9861/3 includes the term NOS (not otherwise specified) and many synonyms; thus it can be considered a nonspecific diagnosis. On the other hand, the primary term for M-9896/3 does not include the term NOS and may therefore be considered more specific. When in doubt which code to use, consult a medical advisor or pathologist.

Tumor size is not relevant for leukemia; the "Size of Tumor" field should be coded 999.

Leukemia can involve organs and body tissues, not just the blood and bone marrow. If the patient has a known leukemia and develops what appears to be a second primary, the histology of the new site should be carefully checked to assure that it is indeed a new primary and not a manifestation of the leukemia in a solid organ.

Radiation therapy to the brain or central nervous system should be coded for leukemia cases, regardless of whether metastases are known at the time of treatment.

If a patient had CNS radiation and surgery, record the appropriate code for the sequence of treatment. 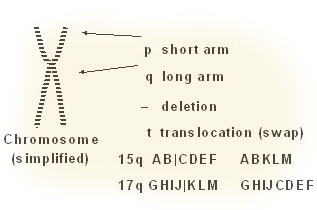 The WHO classification of leukemias includes cytogenetic qualifiers for disease terms because of a decision in 1994 that it was important to define and name leukemias by the chromosomal changes in cancerous cells. To understand the diagnostic terminology, remember that normal human cells have 23 pairs of autosomal chromosomes, numbered 1 to 23, and two sex chromosomes, labeled "X" or "Y." Many things can happen to these chromosomes as they split and come together, including breakage, transference, and complete loss of portions of the chromosome. In a cytogenetic description, t means a translocation or a reciprocal exchange of genetic material between two chromosomes. The letter q represents the long arm of chromosome, and the letter p represents the short arm of the chromosome.

A diagnostic term such as "acute myelogenous leukemia t(15;17)(q22;q11-12)" would be read as a translocation of material from the long arm of chromosome 15 in region 22 which has been swapped with the material on the long arm of chromosome 17 in the region between 11 and 12. Each cytogenetic abnormality is unique. When coding leukemias, be careful not to confuse the various translocations.