Composition of the Blood 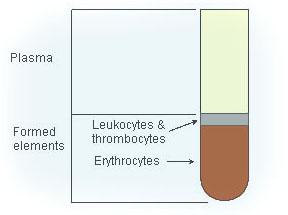 When a sample of blood is spun in a centrifuge, the cells and cell fragments are separated from the liquid intercellular matrix. Because the formed elements are heavier than the liquid matrix, they are packed in the bottom of the tube by the centrifugal force. The light yellow colored liquid on the top is the plasma, which accounts for about 55 percent of the blood volume and red blood cells is called the hematocrit,or packed cell volume (PCV). The white blood cells and platelets form a thin white layer, called the "buffy coat", between plasma and red blood cells.

The watery fluid portion of blood (90 percent water) in which the corpuscular elements are suspended. It transports nutrients as well as wastes throughout the body. Various compounds, including proteins, electrolytes, carbohydrates, minerals, and fats, are dissolved in it.

Erythrocytes, or red blood cells, are the most numerous of the formed elements. Erythrocytes are tiny biconcave disks, thin in the middle and thicker around the periphery. The shape provides a combination of flexibility for moving through tiny capillaries with a maximum surface area for the diffusion of gases. The primary function of erythrocytes is to transport oxygen and, to a lesser extent, carbon dioxide.

Leukocytes, or white blood cells, are generally larger than erythrocytes, but they are fewer in number. Even though they are considered to be blood cells, leukocytes do most of their work in the tissues. They use the blood as a transport medium. Some are phagocytic, others produce antibodies; some secrete histamine and heparin, and others neutralize histamine. Leukocytes are able to move through the capillary walls into the tissue spaces, a process called diapedesis.In the tissue spaces they provide a defense against organisms that cause disease and either promote or inhibit inflammatory responses.

Neutrophils, the most numerous leukocytes, are phagocytic and have light-colored granules. Eosinophils have granules and help counteract the effects of histamine. Basophils secrete histomine and heparin and have blue granules. In the tissues, they are called mast cells. Lymphocytes are agranulocytes that have a special role in immune processes. Some attack bacteria directly; others produce antibodies.

Thrombocytes, or platelets, are not complete cells, but are small fragments of very large cells called megakaryocytes. Megakaryocytes develop from hemocytoblasts in the red bone marrow. Thrombocytes become sticky and clump together to form platelet plugs that close breaks and tears in blood vessels. They also initiate the formation of blood clots.