Anatomy of the Female Pelvis 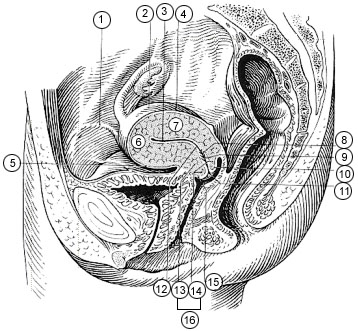 Within the cervix itself, the anatomy is subdivided into the endocervix and the exocervix or ectocervix. The upper two-thirds of the cervix (endocervix) contains columnar glandular epithelium. Adenosquamous carcinoma may arise here.

The cervix projects into the vagina, and the circular trough formed at the upper end of the vagina around the cervix is the fornix. There are four fornices, two lateral, plus anterior and posterior. The lip or portio (portio vaginalis cervicis) is the portion of the cervix that extends into the vagina.

The Pouch of Douglas (cul-de-sac or rectovaginal septum) is the space between the rectum and the uterus. This is the lowest part of the abdominal cavity.