The blood vessels of the body are functionally divided into two distinctive circuits: pulmonary circuit and systemic circuit. The pump for the pulmonary circuit, which circulates blood through the lungs, is the right ventricle. The left ventricle is the pump for the systemic circuit, which provides the blood supply for the tissue cells of the body.

Pulmonary circulation transports oxygen-poor blood from the right ventricle to the lungs, where blood picks up a new blood supply. Then it returns the oxygen-rich blood to the left atrium. 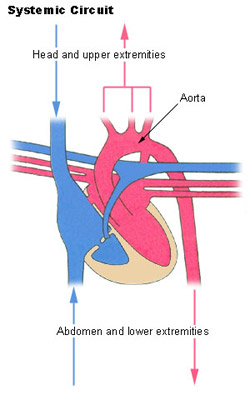 The systemic circulation provides the functional blood supply to all body tissue. It carries oxygen and nutrients to the cells and picks up carbon dioxide and waste products. Systemic circulation carries oxygenated blood from the left ventricle, through the arteries, to the capillaries in the tissues of the body. From the tissue capillaries, the deoxygenated blood returns through a system of veins to the right atrium of the heart.

All systemic arteries are branches, either directly or indirectly, from the aorta. The aorta ascends from the left ventricle, curves posteriorly and to the left, then descends through the thorax and abdomen. This geography divides the aorta into three portions: ascending aorta, arotic arch, and descending aorta. The descending aorta is further subdivided into the thoracic arota and abdominal aorta.

After blood delivers oxygen to the tissues and picks up carbon dioxide, it returns to the heart through a system of veins. The capillaries, where the gaseous exchange occurs, merge into venules and these converge to form larger and larger veins until the blood reaches either the superior vena cava or inferior vena cava, which drain into the right atrium.

Most circulatory pathways in a fetus are like those in the adult but there are some notable differences because the lungs, the gastrointestinal tract, and the kidneys are not functioning before birth. The fetus obtains its oxygen and nutrients from the mother and also depends on maternal circulation to carry away the carbon dioxide and waste products.