In the mediastinum, at the level of the fifth thoracic vertebra, the trachea divides into the right and left primary bronchi. The bronchi branch into smaller and smaller passageways until they terminate in tiny air sacs called alveoli.

The cartilage and mucous membrane of the primary bronchi are similar to that in the trachea. As the branching continues through the bronchial tree, the amount of hyaline cartilage in the walls decreases until it is absent in the smallest bronchioles. As the cartilage decreases, the amount of smooth muscle increases. The mucous membrane also undergoes a transition from ciliated pseudostratified columnar epithelium to simple cuboidal epithelium to simple squamous epithelium. 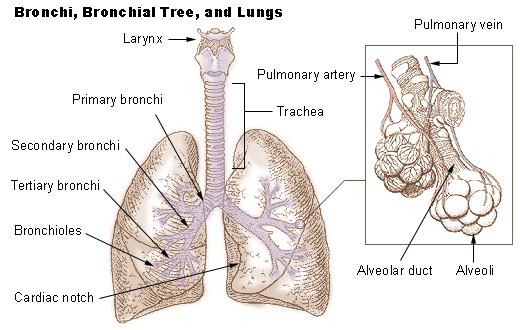 The two lungs, which contain all the components of the bronchial tree beyond the primary bronchi, occupy most of the space in the thoracic cavity. The lungs are soft and spongy because they are mostly air spaces surrounded by the alveolar cells and elastic connective tissue. They are separated from each other by the mediastinum, which contains the heart. The only point of attachment for each lung is at the hilum, or root, on the medial side. This is where the bronchi, blood vessels, lymphatics, and nerves enter the lungs.

The right lung is shorter, broader, and has a greater volume than the left lung. It is divided into three lobes and each lobe is supplied by one of the secondary bronchi. The left lung is longer and narrower than the right lung. It has an indentation, called the cardiac notch, on its medial surface for the apex of the heart. The left lung has two lobes.

Each lung is enclosed by a double-layered serous membrane, called the pleura. The visceral pleura is firmly attached to the surface of the lung. At the hilum, the visceral pleura is continuous with the parietal pleura that lines the wall of the thorax. The small space between the visceral and parietal pleurae is the pleural cavity. It contains a thin film of serous fluid that is produced by the pleura. The fluid acts as a lubricant to reduce friction as the two layers slide against each other, and it helps to hold the two layers together as the lungs inflate and deflate.