The structural and functional characteristics of different types of cells are determined by the nature of the proteins present. Cells of various types have different functions because cell structure and function are closely related. It is apparent that a cell that is very thin is not well suited for a protective function. Bone cells do not have an appropriate structure for nerve impulse conduction. Just as there are many cell types, there are varied cell functions. The generalized cell functions include movement of substances across the cell membrane, cell division to make new cells, and protein synthesis.

Movement of substances across the cell membrane

The survival of the cell depends on maintaining the difference between extracellular and intracellular material. Mechanisms of movement across the cell membrane include simple diffusion, osmosis, filtration, active transport, endocytosis, and exocytosis. 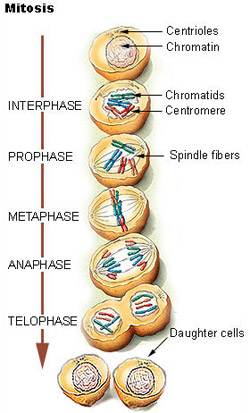 Somatic cells reproduce by mitosis, which results in two cells identical to the one parent cell. Interphase is the period between successive cell divisions. It is the longest part of the cell cycle. The successive stages of mitosis are prophase, metaphase, anaphase, and telophase. Cytokinesis, division of the cytoplasm, occurs during telophase.

Meiosis is a special type of cell division that occurs in the production of the gametes, or eggs and sperm. These cells have only 23 chromosomes, one-half the number found in somatic cells, so that when fertilization takes place the resulting cell will again have 46 chromosomes, 23 from the egg and 23 from the sperm.