Although the nervous system is very complex, there are only two main types of cells in nerve tissue. The actual nerve cell is the neuron. It is the "conducting" cell that transmits impulses and the structural unit of the nervous system. The other type of cell is neuroglia, or glial, cell. The word "neuroglia" means "nerve glue." These cells are nonconductive and provide a support system for the neurons. They are a special type of "connective tissue" for the nervous system.

Neurons, or nerve cells, carry out the functions of the nervous system by conducting nerve impulses. They are highly specialized and amitotic. This means that if a neuron is destroyed, it cannot be replaced because neurons do not go through mitosis. The image below illustrates the structure of a typical neuron. 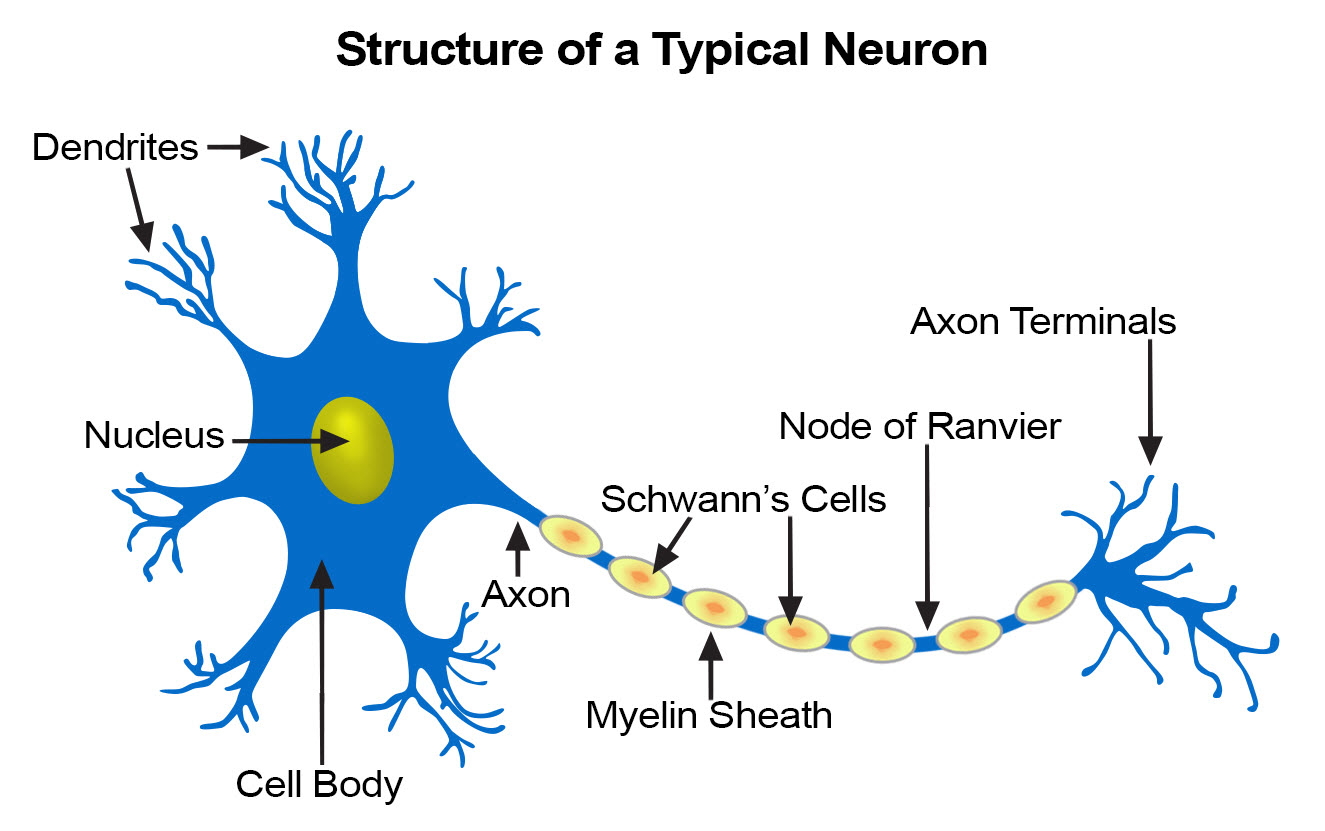 Each neuron has three basic parts: cell body (soma), one or more dendrites, and a single axon.

In many ways, the cell body is similar to other types of cells. It has a nucleus with at least one nucleolus and contains many of the typical cytoplasmic organelles. It lacks centrioles, however. Because centrioles function in cell division, the fact that neurons lack these organelles is consistent with the amitotic nature of the cell.

Dendrites and axons are cytoplasmic extensions, or processes, that project from the cell body. They are sometimes referred to as fibers. Dendrites are usually, but not always, short and branching, which increases their surface area to receive signals from other neurons. The number of dendrites on a neuron varies. They are called afferent processes because they transmit impulses to the neuron cell body. There is only one axon that projects from each cell body. It is usually elongated and because it carries impulses away from the cell body, it is called an efferent process.

An axon may have infrequent branches called axon collaterals. Axons and axon collaterals terminate in many short branches or telodendria. The distal ends of the telodendria are slightly enlarged to form synaptic bulbs. Many axons are surrounded by a segmented, white, fatty substance called myelin or the myelin sheath. Myelinated fibers make up the white matter in the CNS, while cell bodies and unmyelinated fibers make the gray matter. The unmyelinated regions between the myelin segments are called the nodes of Ranvier.

In the peripheral nervous system, the myelin is produced by Schwann cells. The cytoplasm, nucleus, and outer cell membrane of the Schwann cell form a tight covering around the myelin and around the axon itself at the nodes of Ranvier. This covering is the neurilemma, which plays an important role in the regeneration of nerve fibers. In the CNS, oligodendrocytes produce myelin, but there is no neurilemma, which is why fibers within the CNS do not regenerate.

Functionally, neurons are classified as afferent, efferent, or interneurons (association neurons) according to the direction in which they transmit impulses relative to the central nervous system. Afferent, or sensory, neurons carry impulses from peripheral sense receptors to the CNS. They usually have long dendrites and relatively short axons. Efferent, or motor, neurons transmit impulses from the CNS to effector organs such as muscles and glands. Efferent neurons usually have short dendrites and long axons. Interneurons, or association neurons, are located entirely within the CNS in which they form the connecting link between the afferent and efferent neurons. They have short dendrites and may have either a short or long axon.

Neuroglia cells do not conduct nerve impulses, but instead, they support, nourish, and protect the neurons. They are far more numerous than neurons and, unlike neurons, are capable of mitosis.

Commonly called a Morton's Neuroma, this problem is a fairly common benign nerve growth and begins when the outer coating of a nerve in your foot thickens. This thickening is caused by irritation of branches of the medial and lateral plantar nerves that results when two bones repeatedly rub together.